She is the author of numerous best-selling cookery books, which include Rachel’s Favourite Food at Home and Rachel’s Food for Living. Her extremely popular television series for RTÉ and the BBC have been broadcast internationally and she frequently appears on BBC’s Saturday Kitchen.

Rachel is columnist and contributor to a number of publications, and has become Ireland’s leading food personality. The BBC describe her as an “Irish cooking queen” and Good Food magazine believe she “has put Irish cooking on the map. 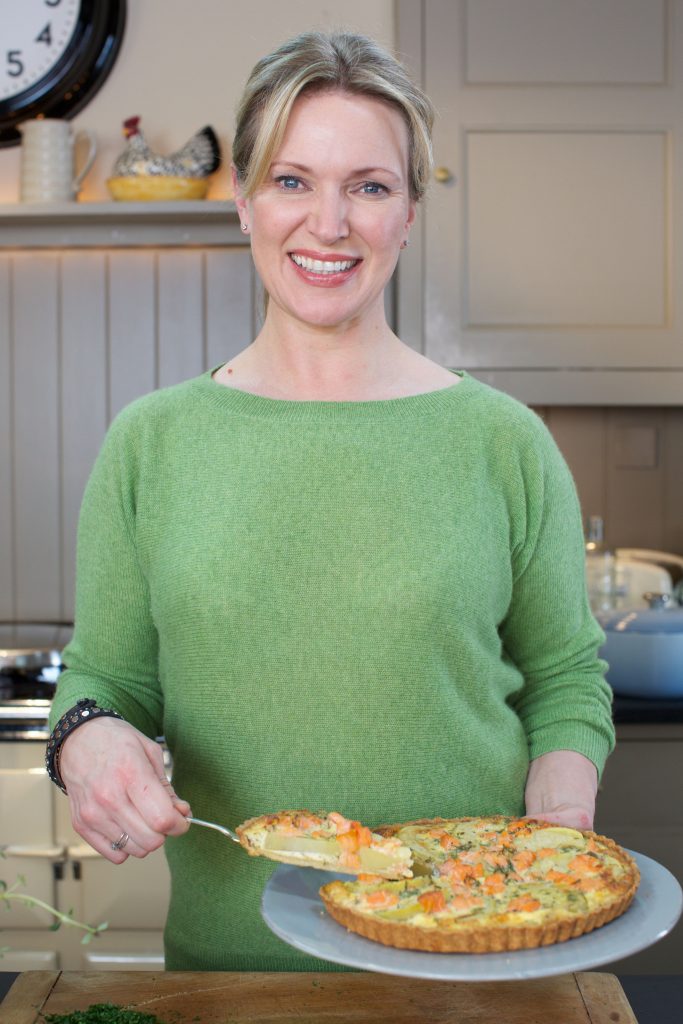 Bertie Malabat has been Head Chef at Barberstown Castle since 2002. Bertie is from the South West of France and brings a wealth of knowledge and recipes from years of working in Bordeaux.  Bertie lives local with his wife and 2 children. Bertie works closely with local suppliers and loves working alongside the hotels gardener growing fresh vegetables and herbs that he uses in most of his exquisite dishes 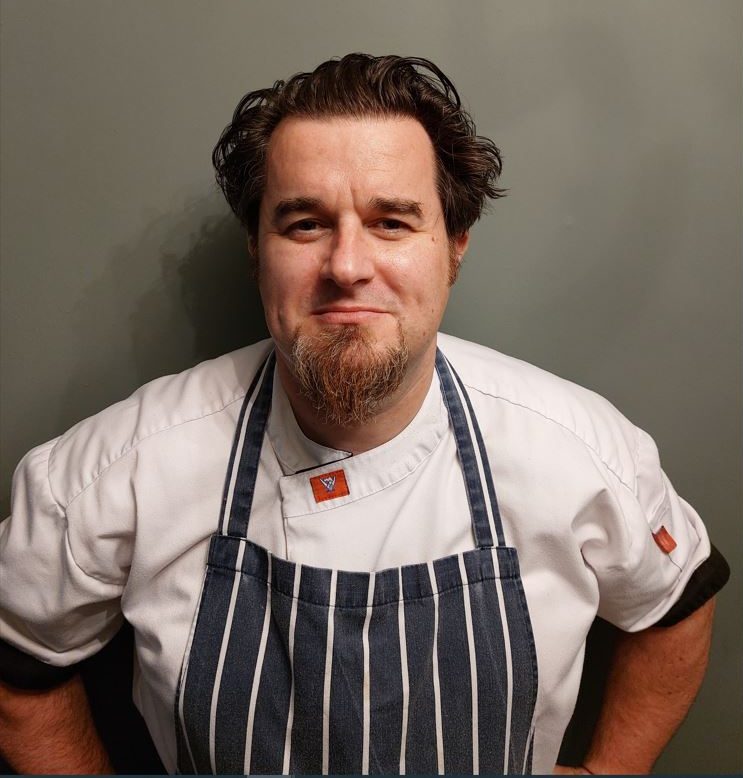 Nicola and Josef are two passionate chefs who have accumulated great knowledge and experience in the food industry worldwide over the past 25 years They returned to Ireland permanently in 2010 to start a family and to realise their dream project that they had planned together since they met,  to open their own small restaurant in Ireland.

TwoCooks Restaurant was founded in 2016 in Sallins, Co. Kildare and it has become a local spot for guests to celebrate their special occasions, big and small. The business has gone from strength to strength. The food journey over the first five years has been a successful adventure.

This year, they had the opportunity to start a new venture in Carne, Co. Wexford. The place they would often go to enjoy sunny days with their kids has now become their newest undertaking.

The Lobster Pot Restaurant has been the place of many happy moments, delicious meals and family memories for over 30 years. Now, Nicola and Josef look forward to continuing this story in a new chapter, bringing the relaxed dining experience from their award-winning restaurant TwoCooks, to this iconic establishment, lovingly known locally as The Pot.

The guests who are planning to visit the new Lobster Pot can expect the best of local seafood and quality, seasonal ingredients and a great selection of drinks served in a family-friendly environment.

Over the past 20 years Nicola has worked in professional kitchens in Dublin, London and Sydney and for the last 6 years  has been teaching professional courses at Cooks Academy, her passion for teaching and passing on her craft and knowledge to her students has made her transition to front of house an easy one.

Josef has been working in professional kitchens for more than 20 years, he swapped his passion for art and design to pursue a career in Gastronomy. He has travelled together with Nicola to Australia, London and France mastering his craft. Originally from Malta, Josef arrived in Ireland in 2002 and although has left many times to travel and work all around the world, he calls Ireland home. He has held the title of Best Chef in Kildare for 3 years, he also helped The Brown Bear to win Best Newcomer and best Restaurant a number of times.

Two Cooks will serve a delicious sorbet to the guests at the Ledger. 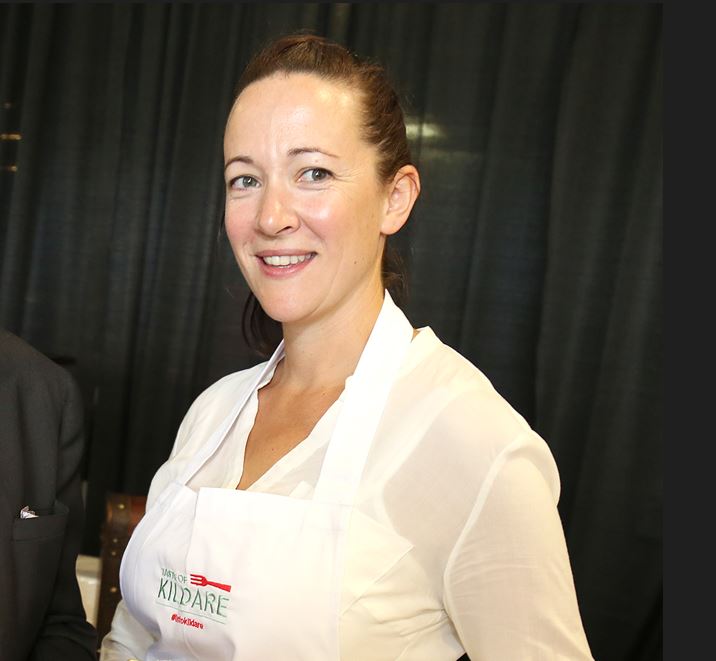 Philip Brazil is an experienced and skilled chef and manager with a significant track record of success in the catering industry throughout Ireland and abroad.

Since graduating from the College of Catering in 1991, Philip has worked consistently at a high level in the hospitality business, beginning after graduation as Commis Chef at Gidleigh Park Hotel, the five-star property in Devon, a Relais & Chateaux hotel, where he worked for just over two years.

Philip followed this with positions across some of Ireland’s top hotels including Fota Island Resort, Adhadoe Heights Hotel, Sheen Falls Lodge and Castle Leslie Estate. Highly creative, organised and adaptable, Philip brings his vast wealth of experience in both casual and fine dining settings as well as banqueting and events to The K Club’s food and beverage programme across all the resort’s various outlets, from The Barton and The Palmer, to South Bar & Restaurant, The Henry Lounge and The Straffan Inn. 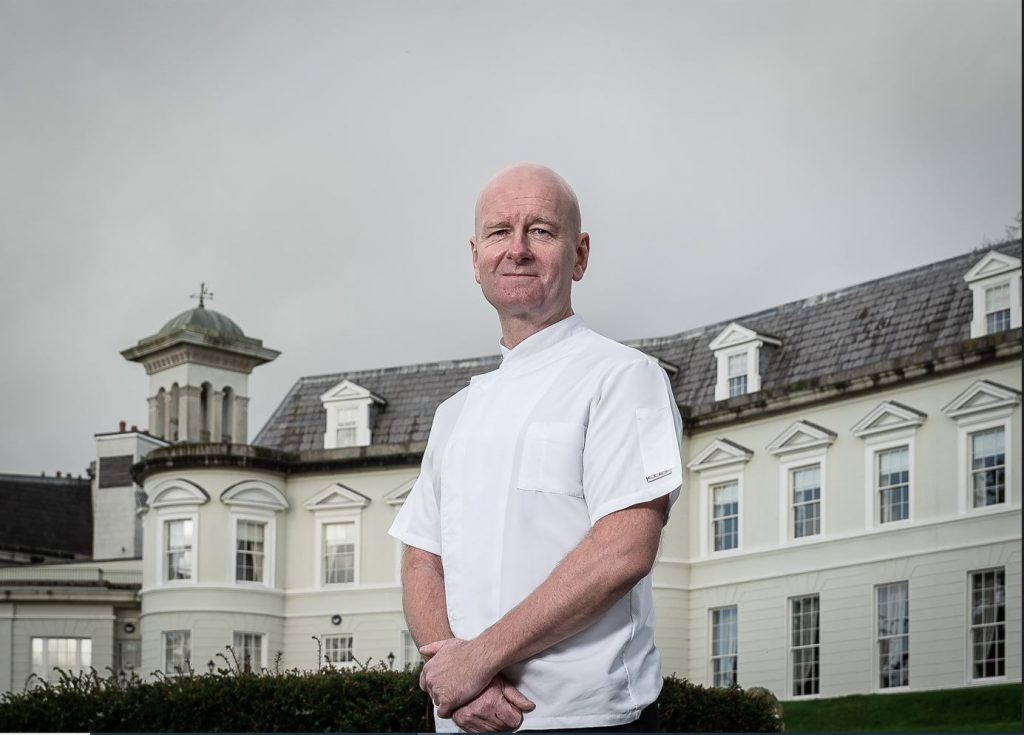 Born in Lyon, France, Charles was raised in a family where respect to food and healthy produce was an important part of his upbringing. When he was young, Charles and his family moved to Marseille in the south of France, a city with a strong mix of cultures and food from different parts of the world, this is where Charles developed a passion for cooking and decided he wanted to pursue a career in the kitchen.

Charles’s restaurant career started as a kitchen porter at the age of 15, then at the age of 16, Charles, with the support of his parents took on his first commis position in a traditional restaurant near his home. From there, Charles worked in multiple Michelin awarded restaurants in the south of France, including Les Trois Forts, Marseille and Le Restaurant des Rois in La Réserve de Beaulieu, Hôtel & Spa Beaulieu.

From 2013 Charles travelled the world honing his skills, working as chef de partie at The Rum Diaries in Sydney, Australia and the Four Seasons Hotel in Hook, UK, travelling to Ireland to take on the role of sous chef in Gregans Castle Hotel for 3 years. Charles made his way back to the southern hemisphere to work as a sous chef in the prestigious 2 Chef Hats Arbour Restaurant in Marlborough, New Zealand staying for 2 years, before travelling to Japan to take the position of sous chef at Shuzo Kishida’s 3 Michelin starred Quintessence, Tokyo.

Charles Degrendele, with over 10 years’ experience, 5 as a Sous Chef in fine dining Michelin starred restaurants around the world, joins Carton House as Head Chef of The Morrison Room, the Fairmont managed hotel’s new fine dining restaurant in the heart of The House, the 18th century Palladian-style mansion, bringing his skills and expertise in fine dining to The Morrison Room. Guests are invited to celebrate the finest Irish ingredients with an exceptional, sophisticated dining experience in the heart of The House, in an historical room like no other where modern cuisine meets refined service

“Cooking is a form of art that feeds all of the senses. For me, the pleasure of this ‘art’ is not just the creative preparation, but also seeing the enjoyment of those who experience our unique creations” Charles Degrendele 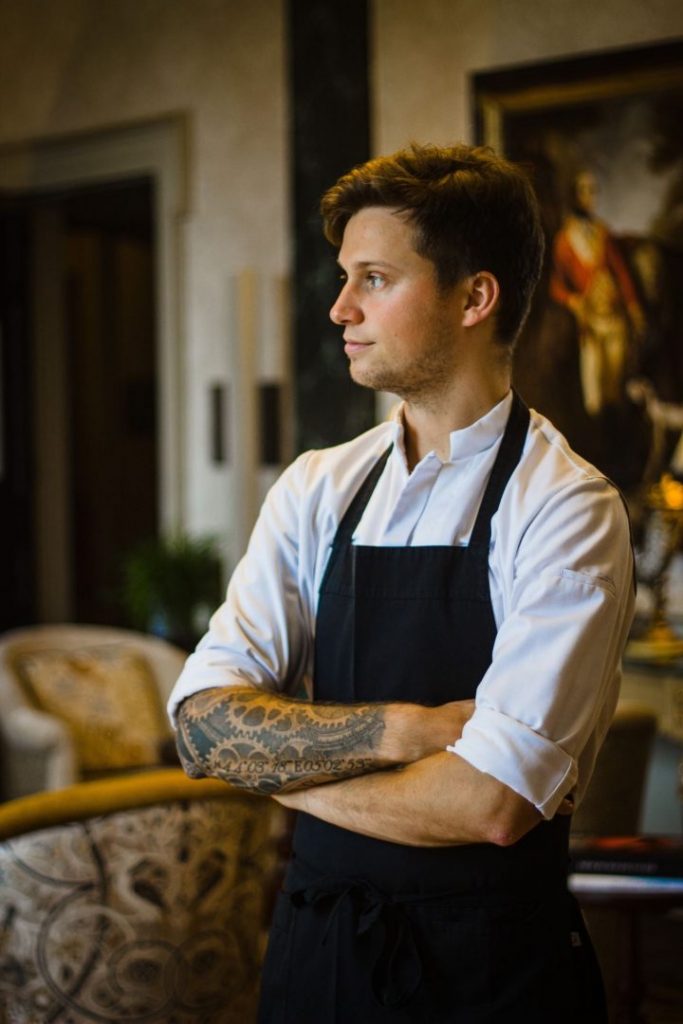 Barry’s love of food started at a very early age. Growing up with a father who is a chef meant Barry was exposed to cooking as a young child. From the age of 15 his journey to becoming an award-winning chef began when he started working after school and during the holidays in his Dad’s restaurant. Barry is a very hand on creative chef who gets excited by creating good food and encouraging his young aspiring chefs to follow their culinary dreams. 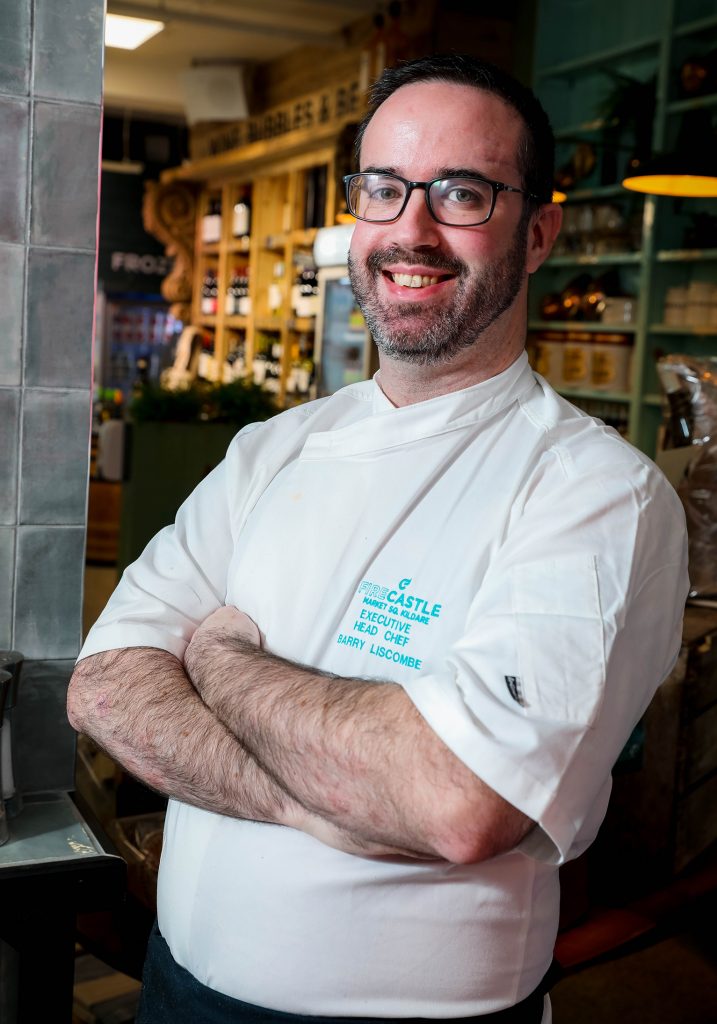 Philip has been the Executive Chef at Killashee Hotel for 6 years. He has has been a chef for the last 24 years and has experience from all over the world.

He worked in Dublin in the Conrad and Morrison Hotels, Melbourne, Palazzo Versace 6 star hotel on the Gold coast (Australia) and the 5 Star Marriot Hotel in Limerick. Philip takes pride in sourcing local produce, the best county Kildare and neighbouring areas have to offer. 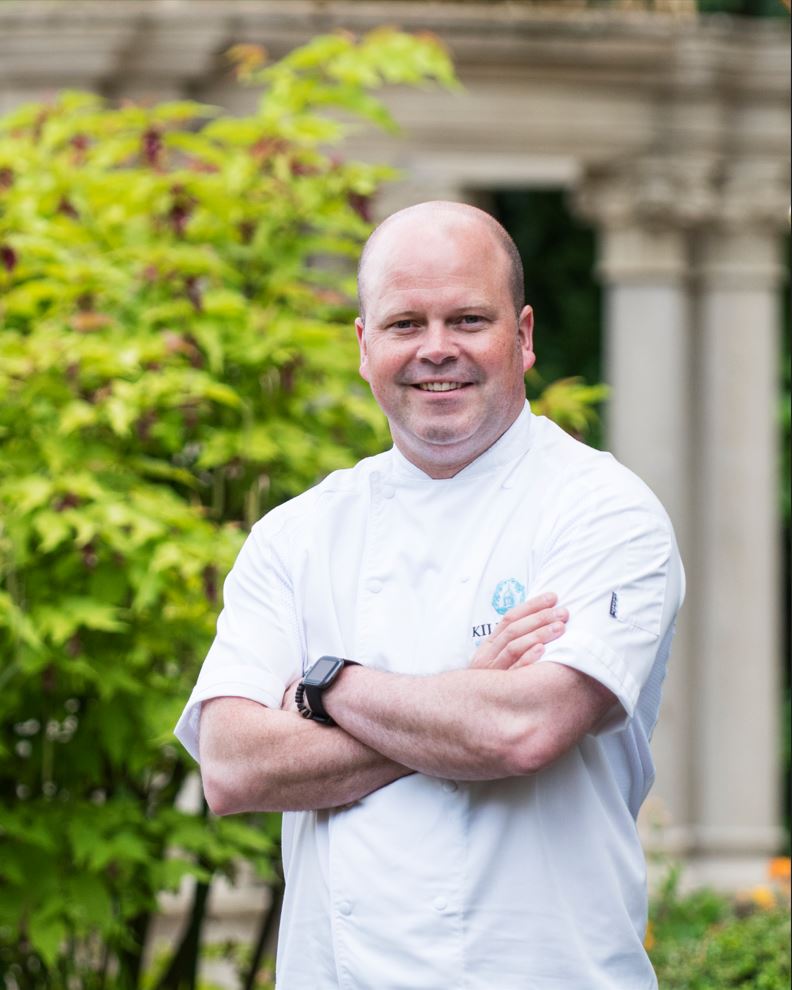 Bernard McGuane was appointed Executive Chef at the Glenroyal Hotel in August 2021.

A new addition to the hotel, Arkle Bar & Restaurant, named after the Irish Bay gelding thoroughbred racehorse, is a stylish and plush new eatery in the heart of Maynooth with a chic 1920s art deco vibe, with intimate spaces for date nights and bright airy spaces for catching up with friends and family.

An alumnus of DIT with a Diploma in Culinary Catering, Bernard is known for his professional and robust personality and dedicated work ethic in the culinary world.

The Enclosure @ Arkle at the Glenroyal Hotel is open for dinner from 5pm to 9pm daily where there is an emphasis on modern Irish cuisine where provenance is a must. 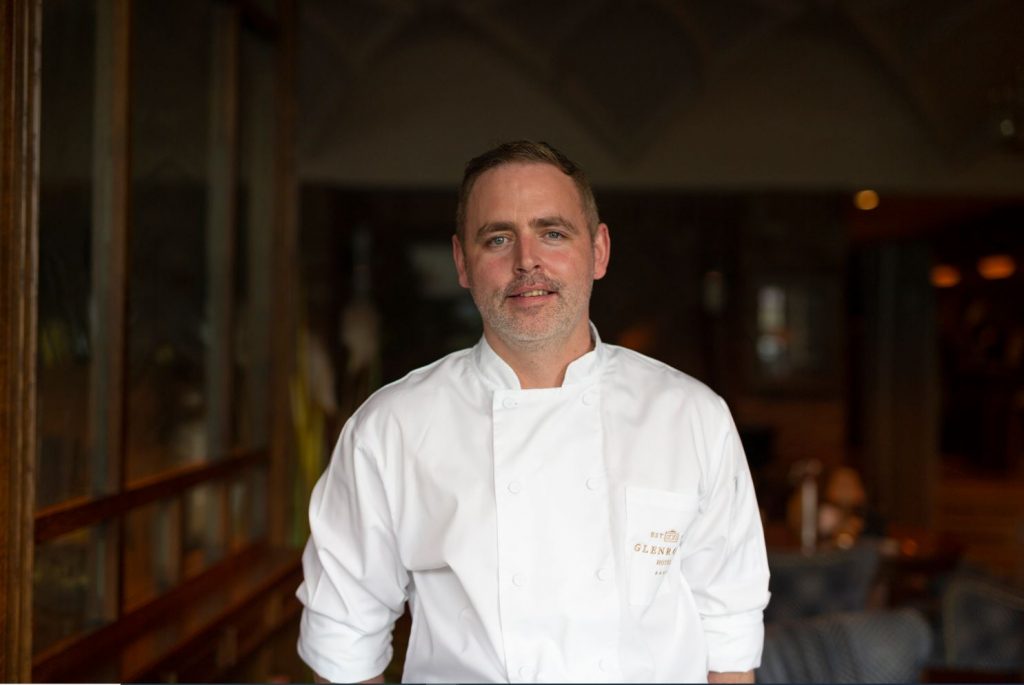