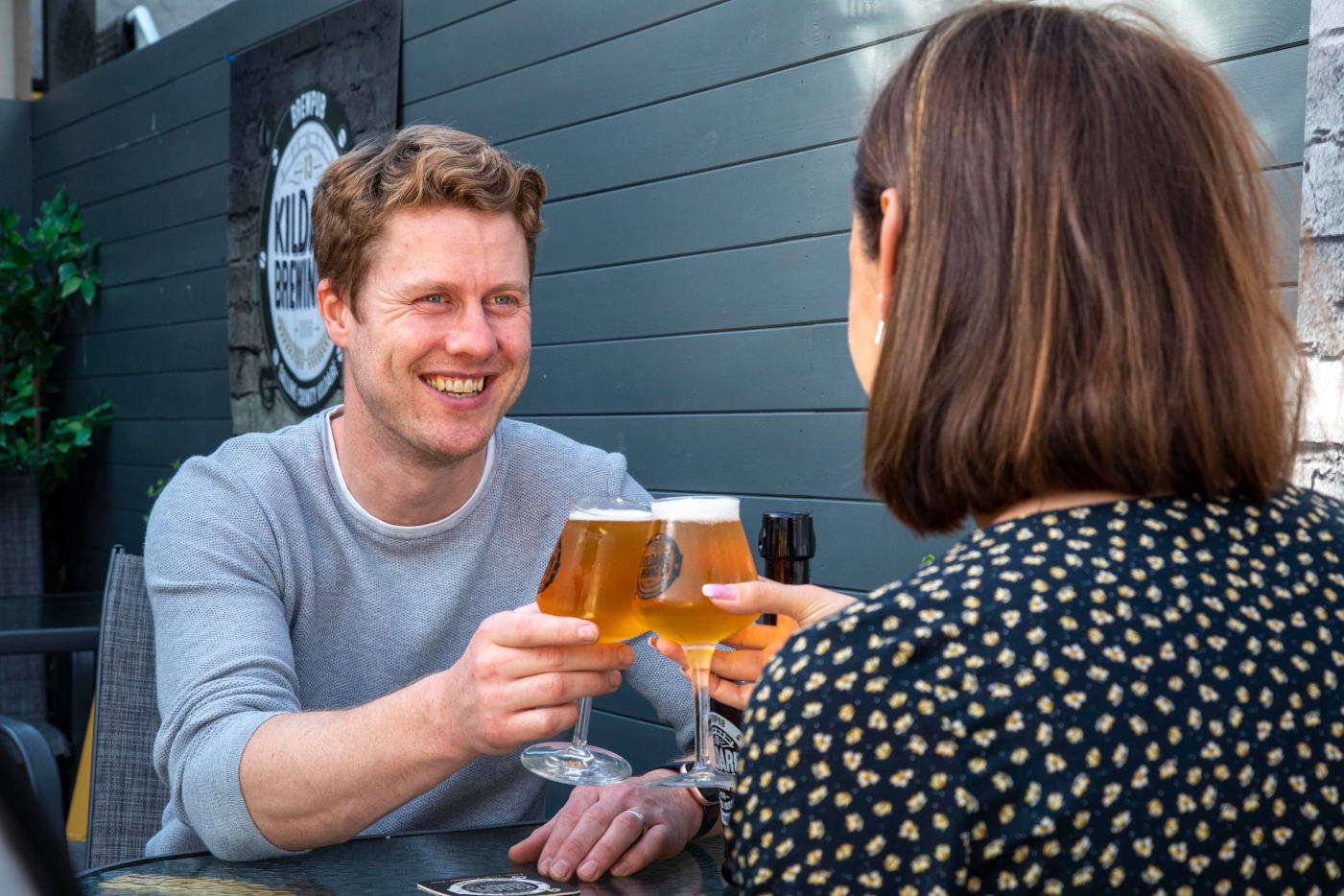 Meet the Maker – Barry from Lock 13

Meet the makers: Over the course of this series, we are celebrating and getting to know some of Kildare’s biggest and best producers in their respective fields.

Lock 13 Brewpub and Kildare Brewing owner Barry Flanagan is first up with his story of how the business has evolved since 2017.

Tell us something about Kildare Brewing Company and Lock 13 that people may not know ?

Lock 13 has been in our family for 27 years as a family business and it’s where I was lucky enough to be able to become a second-generation publican on the back of my parents having the pub and then to guide it through the choppy waters of a recession then as well.

We launched Kildare Brewing Company in 2017 on the back of the success of how we were able to change our business model here in Lock 13 by focussing more on serving local Irish craft beers but matching that with the food from the land.

Our ethos here is a drink made here matched with a food made from the land. Back in 2017, we saw an increase in sales for our business due to being able to offer something different to the customer so we decided to do our own micro-brewery which is where Kildare Brewing began.

We are the first-ever brewpub in  County Kildare, I think there’s five or six of us in the country and it has been a great journey. Since we’ve had a brewery on site that people can see where the beer is made and then have a pint of the beer in front of them, it’s very interactive experience in the sense that you can see all the tanks, you can see a commercial brewery on site but also then you have the beauty of the Grand Canal on our doorstep which was the highways and byways of the brewing industry back in late 19th century as well so it’s come full circle.

As it’s a family business I will hopefully be able to pass that on to future generations as well.

What inspired you to produce Kombucha?

I’ve always had an interest in the industry, both the food and drinks element. With respect to the drink element I’m a qualified brewer, a qualified beer sommelier and a wine sommelier.

I would have done kefir, cream cheese and then Kombuca came on the scene as well. It is quite popular in eastern Europe as it originally came from China centuries ago and the Russians would have drank it as a cure after a night out on vodka!

We linked up with Java Republic who were our tea and coffee supplier at the time. They have a great range of tea’s and we were looking at partners in 2019 when we did our first batch. Christmas season kept us busy at the pub and brewery so we didn’t do anything with Pro Kulture Organic Kombuca until January 2020.

Robert Brewer was exposed to it in Vancouver then as well, he went on a commercial Kombuca course to Barcelona and he saw that we had all the equipment needed and didn’t need to have a massive outlay,  our brewhouse is quite highly speced out, it was at the point that we didn’t need to add any investment to it so we felt there was no harm in trying it.  We pitched to Aldi in 2020 as part of their Grow with Aldi and we haven’t looked anywhere else since. It has taken on a lease of life.

It’s also a product that fits what we want to do. It’s probably the most researched product in world with the health benefits it claims without concrete scientific evidence. The basics are that it’s a tea. Green tea is one of the most consumed teas in the world, we drink black tea here, but if you’re going to eastern cultures it will be green tea and the health benefits they have you’re getting all that benefit too. It’s also non-alcoholic, vegan friendly, dairy free, low in calories… I could go on. We have seen in the pub that there has been a shift and people aren’t drinking as much so we feel that this was a product we were able to create without a massive investment but also was a product that we ourselves as consumers wanted to be able to consume– it ticks all the boxes.

What do you do/Where you do go in Kildare on your day off?

I have two kids which take up a lot of my spare time and I love that. The pub closes Monday and Tuesday and the brewery is open Tuesday to Friday so it means that Monday is a free day and I try to manage that as best I can – it is my day that I  keep free from meetings.

Locally I go for lunch with my wife while the kids are at school so that’s a good one, we have that time together. We also go to Jungle Dens, Playbarns and if the weather is nice we go for walks in the Irish National Stud – we’re so lucky to have that on our doorstep. Sometimes we go for a walk around Kildare Village and the Japanese Gardens. I like taking time out to appreciate even the simple things, walking through Kildare town with the kids to see the square and get the hot chocolate from Firecastle, Silken Thomas as well. Family time is very important to me and that’s what I like to do on my day off.

Other than your own restaurant, where is your favourite place to eat?

I’ve been lucky enough to dine at Aimsir at Cliff at Lyons. It’s not a regular thing and was a once-off treat and it was exceptional. I have a good level of food knowledge and and I know Jordan has our beer up there but his knowledge is unreal, if you’re talking about that kind of AA Class level restaurant it would be Aimsir.

At the minute it is Dunne & Crescenzi in Kildare Village. I recently had the best duck dish I’ve ever had there for lunch. It was outstanding. Complexities, flavours, value and obviously the kids love it for the pastas, pizzas, ice-creams – it’s very family friendly.

At the minute it is George Ezra. Something easy. I like easy going music. This morning I was listening to Ezra going to school. The Greatest Showman is my go-to playlist, every single song in that, I’m singing that even if the kids aren’t in the car. Songs and musicians I like are generally chilled out – George Ezra, Jack Johnson those easy going sounds. You don’t have to think.

Vanilla Sky. Tom Cruise, Penelope Cruz and Cameron Diaz. It’s one that I saw was I was 16 or 17. Some people get it, some don’t get it, but I enjoyed it. It’s probably a movie I’ve watched three or four times. And then you have the stereotypical ones like  Sleepless in Seattle.

Further information about Lock 13 and Kildare Brewing is available here